With a practical roll-out of 5G still many years away, there is plenty of scope in the existing LTE standard to improve network quality and capacity by deploying MIMO, as discussed in this white paper from Northstream. MIMO uses multiple antennas at the base station and the mobile terminal to provide increased data rates and to increase the number of users which can be supported. In some regions, 2×2 MIMO is already the norm for new in-building wireless installations.

Using Maven DAS, it is simple to design for a MIMO installation. Each MIMO antenna connection from the base station goes to a separate RF band module at an Orion master node: this provides the needed separation between the paths. These are digitised into two individual data streams which are routed together through the system to the remote nodes and transmitted on two separate antenna outputs. The example in the figure shows the two MIMO paths being broadcast by a pair of quad-band remote nodes. This configuration supports for example 5 bands with MIMO on three of the bands. A remote node can also have multiple antenna outputs (for example, 3 bands on the first antenna output and a 4th MIMO band on the second antenna output). 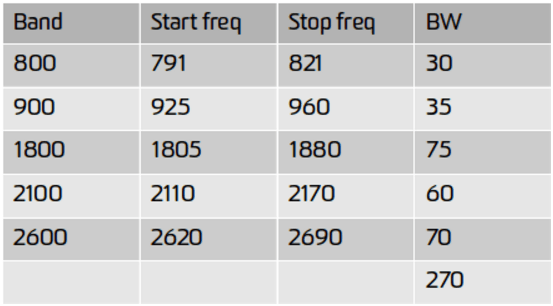 For a DAS to support N-way MIMO, independent duplicates of the frequency bands using MIMO need to be transported over the digital links. Support for the 5 European RF bands already requires 270 MHz of RF spectrum to be transported, as shown in the table: this is close to the limit that can be supported per digital link by previous generations of digital DAS products. If we add full 2×2 MIMO support for e.g. 800, 1800 and 2600 MHz bands then we reach 445 MHz, far exceeding what can be transported on a single 10G link. The QSFP digital interconnection in the Maven DAS, with 1200 MHz of transport bandwidth, has plenty of capacity to deal with even 4×4 MIMO over a single QSFP link. The remote nodes support up to 4 local SFP+ connections for MIMO clusters, with the QSFP links providing the high-bandwidth backbone.

Coverage system designers can therefore offer a future-proof solution to their clients by installing the Maven next-generation DAS. As and when operators choose to roll out MIMO services, the infrastructure is prepared.